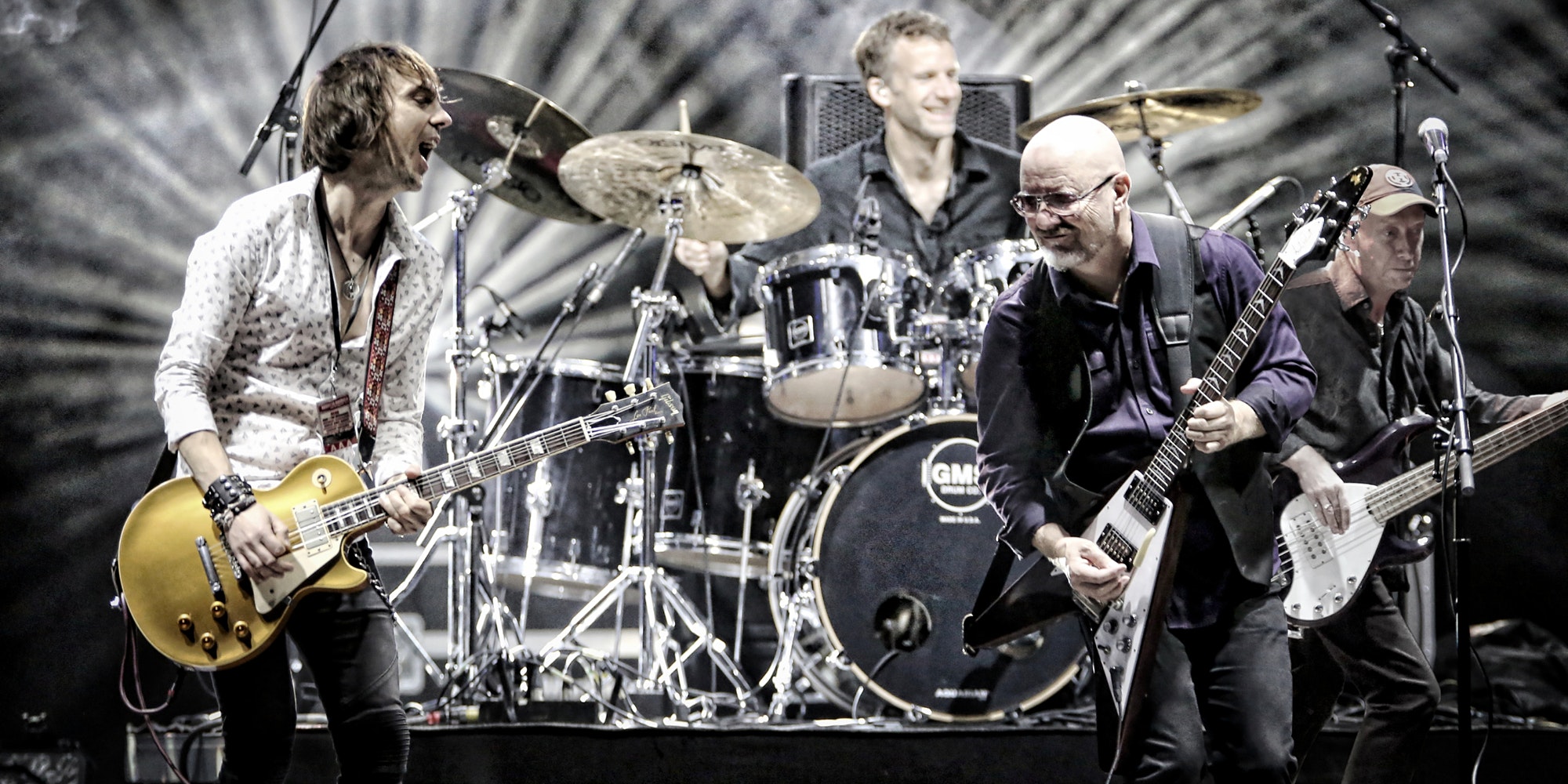 Wishbone Ash appearing at The Tin Pan in Richmond, VA

This is the third and final time the East Coast/Midwest U.S. tour leg has been scheduled – and it is happily happening 23 February thru 27 March of 2022. Needless to say, the Band and the Fans are overjoyed to get back together and jam! The third time’s a charm, as the saying goes.

“Thankfully, before Covid-19 shut live music down around the world, we did manage to celebrate our 50th anniversary by touring Europe and other territories in support of our new album, Coat of Arms,” says Andy Powell. “The USA Midwest and East Coast was not quite so lucky, missing out on the party. So we’ll be resuming the celebration under the banner “Late to the Party” for our friends and fans who missed out due to the pandemic.”

This is the longest gap in gigs for the band since the founding in 1969. For example in just the last few years in addition to the U.S.A. and Canada, countries like Germany and France have been visited in Europe, the UK of course, plus Japan and South Africa. Each year, approximately 30,000 actual road miles are racked up, plus countless flights taking the band’s special brand of twin lead guitar based rock around the planet.

“Everyone by now knows that Wishbone Ash is one of the hardest working bands in rock today and so it really was a major blow, to be wrenched out of our comfort zone – being on tour. A lot of personal, financial and physical adjustment was needed in taking this forced hiatus, for all of us, but we kept ourselves busy. I’ve been working my gear and working on songs. I also started my online patreon.com/andypowell site where I dispense road stories, guitar tips and songwriting insights. This kind of thing has kept us focused and creative individually, but there’s nothing quite like a life on the road, especially if you’ve been living that way for 50 years!”

Their last concert was at the Triple Door in Seattle on Friday the 13th of 2020. “I looked like a hermetically sealed passenger when I boarded for home,” Powell says. We were getting intel from the authorities as we rounded the corner up California, the virus seemed to be on our heels.”

“After that, the whole world seemed to shut down and we had to make some major adjustments. We miss all our friends and fans around the U.S. and the World, in fact, and the camaraderie and support that brings “

Looking back at a half century of music in general, The Beatles, The Blues Boom and Psychedelia had made their impact on Classic Rock and the creative possibilities were infinite. Pioneering the use of twin lead guitars, Wishbone Ash hit the road in 1970, opening for Deep Purple. Andy Powell jumped up with Ritchie Blackmore at soundcheck and Ritchie loved it and recommended them to MCA which led to their first, self-titled album later that year. The band quickly began headlining in arenas, stadiums and festivals throughout the world. Taking full advantage of the fertile musical environment, they produced a distinctive brand of melodic rock, readily apparent on such hits as “Blowin’ Free, “Time Was” “The King Will Come” “Helpless”, “Runaway” and many more. Power and melody have made the Ash a hard act to follow, while they are currently being discovered by new generations of loyal rock fans.

Inspired equally by British folk traditions, American jazz and R&B, the group played to public and critical acclaim. Celebrating 50 continuous years of touring – up until the pandemic, Wishbone Ash, the quintessential road band, has gained worldwide recognition, based firmly on a regime of relentless touring and recording which has fed and grown their rabid following.

The band includes founding member Andy Powell, who handles lead vocals and trades licks with Yorkshire’s Mark Abrahams. Bassist Bob Skeat, a 20-year veteran of the band, keeps the bottom rocking with Joe Crabtree, one of the best of Britain’s new breed of drummers whose performance credits include Pendragon and David Cross of King Crimson.

Now with Coat of Arms, their 25th studio album release (and their 100th unique release through their history), Wishbone Ash continues to prove they are not a band to rest in the past. Wishbone’s third album, Argus (1972), was named The Best British Album of the Year by Melody Maker and considered to be one of the all-time classic rock albums, together with Pilgrimage (1971) and New England (1976). More recently, The Power of Eternity (2007), Elegant Stealth (2011) and Blue Horizon (2014) have each garnered enthusiastic praise. The band’s biggest seller, Live Dates (1973), is one of the highly rated live albums of the 1970s. The latest musical project is Wishbone Ash: The Vintage Years (Snapper Music), a 32-CD deluxe box set spanning the years 1969 to 1991, featuring a coffee table book, posters, floppy discs, rare photos and more.

The constant of Wishbone Ash has been Andy Powell, voted into the Ten Most Important Guitarists in Rock History (Traffic magazine, 1989) and the Top 20 Guitarists Of All Time (Rolling Stone). Through the years, he has been featured in notable publications, including Guitar Player, Vintage Guitar and Guitarist, and has appeared at the Guitar Institute in Los Angeles. In 2015, he released his musical memoir, Eyes Wide Open: True Tales of a Wishbone Ash Warrior (co-written with Colin Harper, Jawbone Press) which offers an inside track of five decades of life on the road and in the studio.

The excitement palpable to get back on the open road, celebrating 50 continuous years at 52.