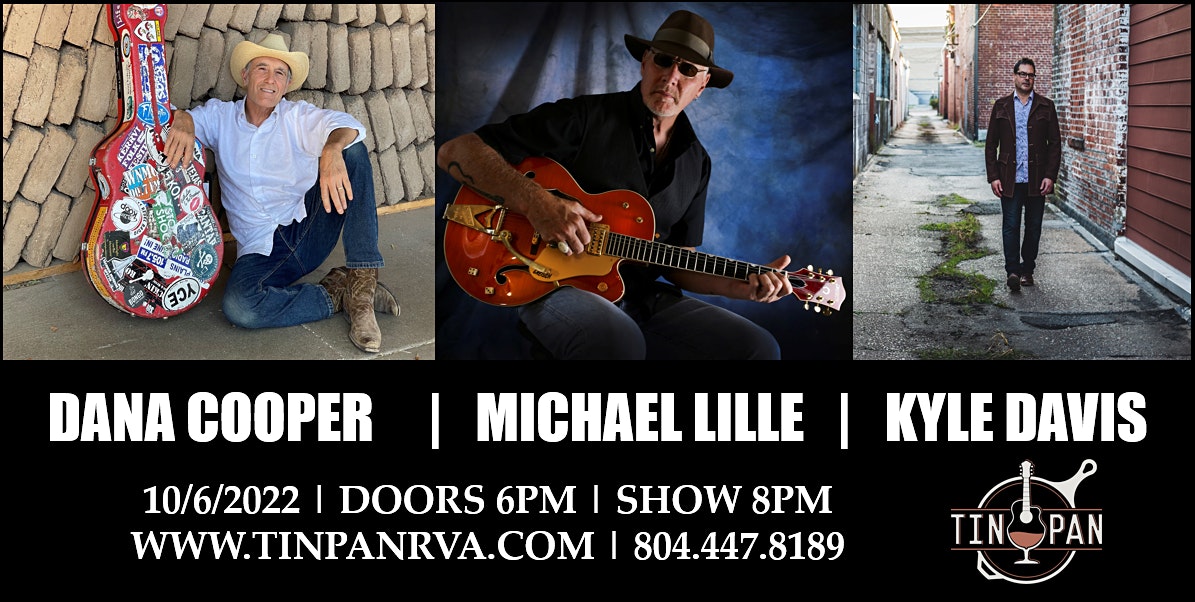 An evening of singer songwriter magic with solo sets from all three and a final set in the round. You are not going to want to miss this one!

Dana Cooper has had a vast career. Starting with his 1st self-titled Release on Elektra Records. His studio band consisting of legendary players- Leeland Sklar & Russ Kunkel. Dana is known for insightful storytelling & songwriting, as well as his impressive guitar and harmonica playing.

During his years as a Troubadour, Dana has received many Accolades including

– In the Spirit of Follk Award

With his Latest CD Release “I Can Face The Truth”, Dana faces hard truths head on with humor and heartfelt expression. Release Date- February 18, 2022.

Michael Lille is a Virginia native and award winning singer/songwriter who has traveled the globe and shared his music and love of adventure with friends and fans for over 4 decades.

Lille is a winner of the 1993 Kerrville new-folk songwriting award as well as a first place winner in the Telluride Troubador competition in 1996. In addition to his solo work, Lille is a member of The Sherpas (with fellow new-folk winners Tom Prasada-Rao and Tom Kimmel), SGGL, the popular DC/Charlottesville-based quartet, and Man from Tuesday with San Diego based songwriter Andy Lund. Lille was also one-third of The Famous Unknowns with fellow VA musicians Robbin Thompson and Lewis McGehee.

It started with Cellar Door Records then a record produced partially by Don Dixon with the other portion using Bruce Hornsby’s Band “The Range” on Windmark Records. That landed him on the cover of Billboard Magazine and led him to be signed to a production deal and later a record deal with legendary producer Phil Ramone, . He shared stages with the likes of Bob Dylan, John Mayer, Shawn Colvin, Sheryl Crow and many others.

Initially having success on AAA radio but the dissolution of labels and changing labels run will run its course. After releasing singles on Universal, Davis took a long break coming back to years ago to release “Make it Count”. The London Guardian said it was a home run for him.

In the end Davis said. “I’m thinking I really want to make another Record because so much has happened and there’s so much to say . I guess for a lot of artists it’s expression and it’s therapy”. I have a greater appreciation for the way music genuinely touches our souls and how much we need it on this second time around for me.