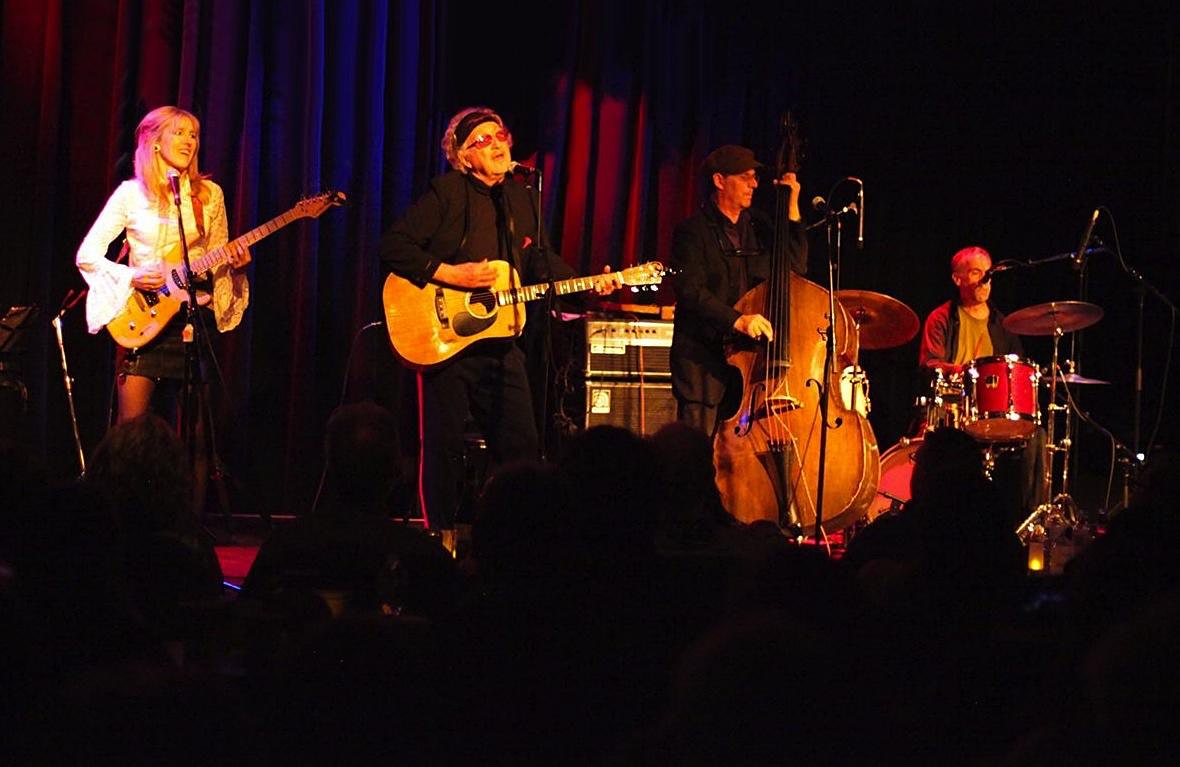 Originating from a chance meeting at a Boston folk club open mic night in 1971, Aztec Two-Step (Rex Fowler & Neal Shulman) burst on the scene in ’72 with their self-titled debut album on Elektra Records. This first album and their three subsequent albums for RCA Records made the duo staples of progressive FM and college radio, helping to usher the folk-rock music of the 1960s into the 1970s and beyond. Rex and Neal went on to spend a lifetime of making music together. However, after 47 years of recording and non-stop touring, Neal Shulman retired in 2018.

In this new era of Aztec Two-Step, original founding member, lead singer and songwriter Rex continues on with their captivating songs (including some of Neal’s originals), expanding the band’s musical legacy with his new ensemble. With 2 and 3-part harmonies, multi-instrumental arrangements, and Dodie’s electrifying guitar work, they recapture the sound of the duo’s original studio recordings. Aztec Two-Step 2.0 will perform ATS fan favorites and forgotten gems, with Rex’s stage patter still as engaging, funny and poignant as ever.

Accomplished songwriter and recording artist, Dodie Pettit first met Rex Fowler when she was a session player and singer on ATS’s 1980 “Times of Our Lives” album. Dodie and Rex were recently married and are the heart and soul of the new Aztec Two Step “2.0” ensemble. A member of the famed The Untouchable, and then The Enchanted Forest, both All-Girl Bands of the mid-1960s, Dodie is also a former Principal Dancer for the American Repertory Dance Company and had a distinguished 15-year career on Broadway as an original cast member of The Phantom of the Opera, as well as appearing in Tony Award winning musicals CATS and Titanic.

Record producer, songwriter, recording artist and touring musician, Roues has had a rich and fulfilling 40-year career. He continues to perform his original music regularly with The Roues Brothers, Finn & The Sharks and The UpSouth Twisters. Muddy has performed live or recorded with luminaries, B.B. King, Bo Diddley, Howling Wolf, James Cotton, Sam and Dave, The Chambers Brothers, Wilson Pickett, John Hiatt, Joe Ely and David Bromberg. Muddy was an honored band member in the critically acclaimed documentary film, “The Other Side of Nashville” featuring Carl Perkins.

Peter is our band’s diamond in the rough whom we recently met at a cozy cabaret in Westport, CT when he was sitting in with an exquisite jazz quartet led by multi-instrumentalist Joe Mao. Over the years Peter has performed as a member of several Connecticut orchestral and theater programs including the Hartford Symphony. He is currently the principal percussionist with the Norwalk Symphony. Being both a revered and accomplished musician and teacher, we knew immediately that Peter’s nuanced and versatile drumming style would be a perfect fit for ATS’s diverse musical canon.

What the fans are saying about ATS 2.0:

“I went to the show… this past Saturday night. Wasn’t sure what to expect. How do you replace Neal’s guitar work? What a pleasant surprise!! Rex was Rex and the band was awesome!….Don’t miss the opportunity to see them!”

“Dodie is a Guitar Wizard!”