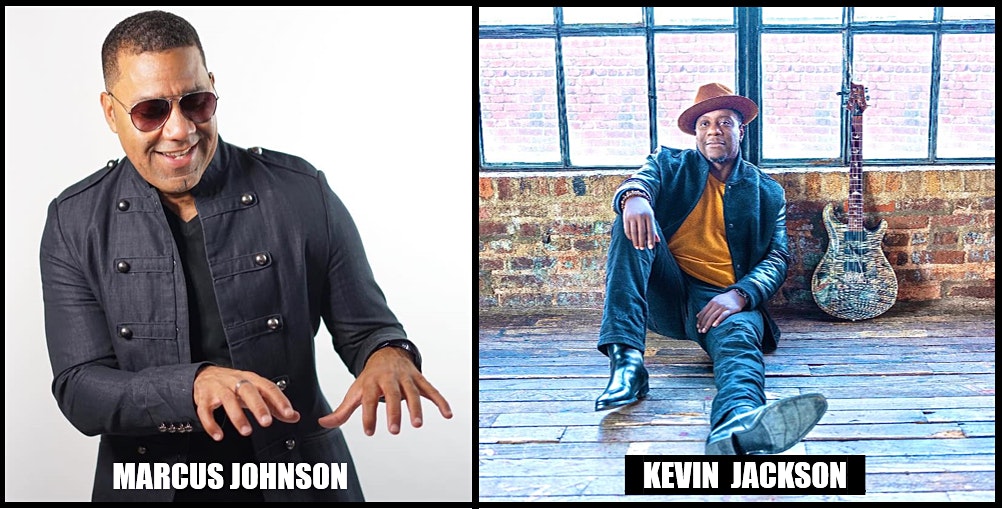 Marcus Johnson and Kevin Jackson appearing at The Tin Pan in Richmond, VA

While pursuing his JD and MBA at Georgetown, he independently produced and distributed his first CD (Lessons in Love), which sold more than 40,000 units; a phenomenal success for an unknown independent artist’s debut release. This album helped him launch his career as a renowned jazz keyboardist/pianist, and later, he released his second CD (Inter Alia), with staggering success

To date, Marcus has released more than fifteen Billboard charted CDs, and has the distinction of having his groundbreaking 2008 Billboard Top 20 Contemporary Jazz FLO (For the Love Of) Anthology, which consisted of three distinct CDs — FLO Chill, FLO Romance and FLO Standards – all chart Top 10 on Billboard Contemporary Jazz Charts simultaneously.

The release of Poetically Justified (2009) and This is How I Rock (2011), which were Top 20 Contemporary Jazz CDs, solidified Marcus Johnson as the heir apparent to the funky urban groove music style and sound made famous by legendary jazz greats, George Duke and Herbie Hancock.

Baltimore, Maryland native Kevin Jackson has been taking the Smooth Jazz industry by storm since 2012, collaborating with artists such as Wyclef, Maysa, Oli Silk, and Eric Darius just to name a few. His current single “Elevation”, featuring Judah Sealy, can be found on the Billboard Smooth Jazz Playlist and Watercolors on Sirius XM.

Jackson’s mix of original compositions and acoustic renditions will take his listeners on a journey of anticipation for what’s next. Jackson produces projects that offer something for every persons taste, whether it is Rock, Contemporary Christian, Jazz, Soulful R&B and more.

Jackson is often thought of as a “quiet giant” due to his humble and quiet nature but, once on stage it’s easy to see this is where he’s most comfortable and Jackson comes to life through his music. His live productions set him apart from the rest.

Throughout the years, Jackson has opened for Anthony Hamilton, performed live shows around the country, and produced four albums. During the COVID-19 pandemic, Jackson continued his work and love for music by performing private shows for family, friends, and fans alike. He successfully recorded his fourth debut album set to release in August 2021. Catch his new single “Elevation”, featuring Judah Sealy streaming on all platforms and available for downloads in June 2021.