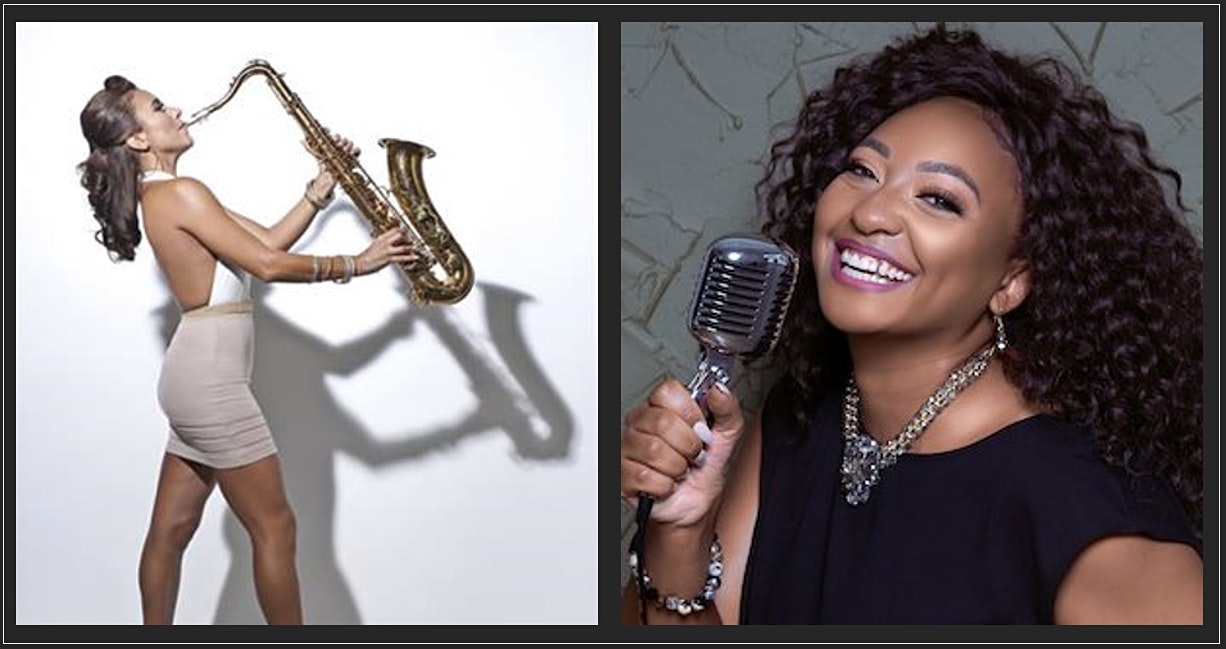 With the release of her dynamic new album Live at Yoshi’s – 10 Year Anniversary Special, Jessy J celebrates a remarkable decade since she brought her sizzling beats, dynamic Latin and samba rhythms and sensual melodies to contemporary jazz via her #1 hit debut album Tequila Moon. Following in the tradition of other jazz greats – including Dee Dee Bridgewater, Pat Martino, Joe Pass and Arturo Sandoval – who have released albums recorded at the historic Oakland venue, the charismatic saxophonist captures the excitement and spontaneity of her live performances with a set list featuring her classic hits and several songs fresh to her eclectic repertoire.

“I felt like a live album would be the perfect way to mark the 10thanniversary of Tequila Moon, because I love performing live and it presents a completely different experience than my studio albums, with exciting interactions with the audience and the spirited ensemble action with my band,” says Jessy, whose previous releases include True Love(2009), Hot Sauce(2011), Second Chances (2013), My One and Only One(2015) and California Christmas(2016), which marked her debut on her own independent label Changi Records.

“My sax solos onstage are much longer, and each song takes on a personality of its own that it may not have had on the original recording. Having recorded six albums and performed all over the world, I feel like I have reached a whole different level of maturity as a player and performer since the beginning – and it’s great to have the opportunity to share that vibe on this live album. Yoshi’s has an incredible history of performances by jazz legends, and it’s special for me because I’ve always had incredibly passionate audiences there who really appreciate what I do. Usually when artists perform a show, it’s right in the moment and then it’s gone, so it’s exciting to be able to showcase exactly who I am as an artist right now with this special recording.”

A major part of capturing the essence of Jessy is experiencing the way she ensembles with her powerhouse band, which includes longtime members, drummer Iajhi Hampton and bassist Frank Abraham. Rounding out her group at the Yoshi’s concert was veteran keyboardist/pianist Jay Rowe, who has played many of Jessy’s East Coast shows for years and who performed with her at Pizza Express in London in 2015. Rowe also contributed several arrangements and his otherworldly keyboard talents to California Christmas. Jessy and her band bring new life to her #1 Billboard hits “Tequila Moon” and “Tropical Rain,” her Top 5 hit “Hot Sauce,” her Top 10 hit “Tango Boy” and audience favorites like “Mas Que Nada” and “Sin Ti/Without You.” The saxophonist also debuts her twist on the timeless Antonio Carlos Jobim Brazilian classic “Agua De Beber” and two original songs with an old school 60’s styled jazz flair.

Another unique aspect of Jessy J Live at Yoshi’sis that everything onstage was mixed by two different crews, a sonic duality that is used on the hit ABC-TV show “Dancing With The Stars,” whose live band Jessy has played on telecasts with on and off since 2014. “On the show,” she says, “they create one mix for everyone in the house and then there is a remote crew outside that mixes the sound for the television audience. Our setup at Yoshi’s is on a much smaller scale, of course, but the dynamic is the same, with one crew inside mixing for the house and the other outside the venue, mixing sound for the CD.”

Looking back over her ten year recording career, Jessy reflects that she has made a lot of stylistic choices from project to project. “I have always written songs reflecting my cultural and life experiences,” she says. “Tequila Moonwas a very organic album recorded live with every musician together in the studio, which was rare at the time because more people were tracking things separately. My producer, Paul Brown, and I kept that spirit going on True Love, which had even more of a Latin element. Then with Hot Sauce,I worked with the great Joe Sample, who gave me a whole different perspective on the recording process because he came from a time when groups like his band The Crusaders would record six songs an hour for hours at a time.

“I shifted gears a bit on Second Chances, which was my first CD that didn’t have a lot of percussion,” Jessy adds. “I ventured away from the Latin sound for a more R&B/jazz approach, with a little New Orleans mixed in, working with Jeff Lorber, Jimmy Haslip, Norman Brown and Johnny Britt. Then I ventured back into more exotic textures, exploring my Latin roots and African rhythms, on My One and Only One. Because California Christmaswas on my label, I could go all out, handpick my favorite musicians from over the years, and play everything from classical and jazz to Latin, funk and blues. My goal was to bring a new perspective to songs we have known in other ways for years.”

Jessy’s connection to her Latin heritage runs deep, as her father is originally from Mexico and her mom hails from Texas. Born in Oregon and raised in southern California, Jessy grew up in a home full of big family get-togethers, Mexican feasts and lots of Latin, jazz and pop music. Her musical influences include Cannonball Adderley, John Coltrane, Charlie Parker, Grover Washington, Jr., Sergio Mendes, Ricky Martin and Gloria Estefan. She is grateful that her Hispanic fans have been inspired by her love of these musical roots, which has sometimes helped foster connections with their own family heritage. Jessy’s European fans may not connect with that side of her in a personal way, but they have long embraced the exuberant exotica she brings to her style of contemporary jazz.

After graduating from USC with a degree in jazz studies, Jessy’s equal passion for pop led her quickly into recording sessions with artists like Michael Buble, followed over the years by tours with Jessica Simpson, The Temptations and Michael Bolton. In 2004, Jessy joined the cast of the off-Broadway show “Blast!” and drew on her multitude of skills as an actress, singer, dancer and sax player as she performed throughout the U.S., in London and Tokyo. Even while working with pop and Latin artists, she put together her own band, performing at such L.A. hotspots as The Jazz Bakery and, through her work with the Henry Mancini Institute and Orchestra, performing at numerous official functions and private parties.

In addition to her airplay and chart success, tours with smooth jazz greats like Lorber, Gerald Albright, Jeff Lorber, Euge Groove and Peter White, and her own international tours everywhere from Cuba, Nigeria and Malaysia to the Philippines and Japan, Jessy has performed on the hit television competition shows “American Idol” and “The Voice.” The year Steven Tyler was a judge on “Idol,” he was so impressed with her performances that he invited her to play on Aerosmith’s 2012 album Music From Another Dimension.

“It’s been an incredible journey so far, and I’m excited to mark the 10thAnniversary of being a recording artist with this Live at Yoshi’salbum,” Jessy says. “At the same time, I’m looking ahead to my second decade and exploring more world and classical music in addition to deeper excursions into the styles I have played for many years. I always want to bring something new and different that everyone can enjoy, with music that reflects my commitment to evolving as an artist.”

Los Angeles native independent singer-songwriter Selina Albright has an impressive way of evoking powerful emotional responses in her listeners. With her sultry, angelic tone and elaborate vocal arrangements, combined with powerful multi-octave wailing and energetic stage presence, she certainly is one whose voice and spirit pierce directly to the soul and command attention.

In her style, you’ll hear influences of Ella Fitzgerald, Maxwell, Minnie Ripperton, Whitney Houston, Stevie Wonder, Beyonce, Amel Larrieux, D’Angelo, Mariah Carey and Dinah Washington. A balanced blend of all of these is the key to her versatility, empowering her to maintain creative flexibility from project to project.

She is sassy. Jubilant. Loves high-quality food. She regularly pulls back the curtain for her social media followers to reveal a dynamic glimpse of who she is, has been, or is becoming. Then, she therapeutically transforms her life experiences into intimate, relatable lyrics and velvety melodies that would appease any music lover.

Albright’s 2010 Jazz single “You and I” was one of iTunes’ Top 100 Jazz Downloads. Her 2013 EP “Brighter” topped the UK Soul Chart for four weeks straight, and her 2016 Jazz single “Sun Comes Up” would prime the market for her 2017 debut R&B/Soul CD “Conversations,” which put Selina Albright’s music on the map internationally. In 2020, she released hit single “Discovering,” a lyrical celebration of her recent journey into motherhood.

Under her belt are a number of notable collaborative projects, international tours, and vocal features across many genres. You’ll hear her recorded with artists like Gerald Albright, Andrae Crouch, Peter White, Dave Koz, Rick Braun, David Benoit, and Jonathan Butler. Aside from these, the artist has also joined forces with Electronic Dance Music DJs like Manufactured Superstars, Forcing Function, and Vinnie Maniscalco, demonstrating yet another facet to her creativity, and the world has responded strongly.

Next for Albright are many more collaborations, and the upcoming release of her single, entitled “Holding On,” in which she pulls back that curtain once more, with a vulnerable and provocative call to action for those oppressed by social injustice.