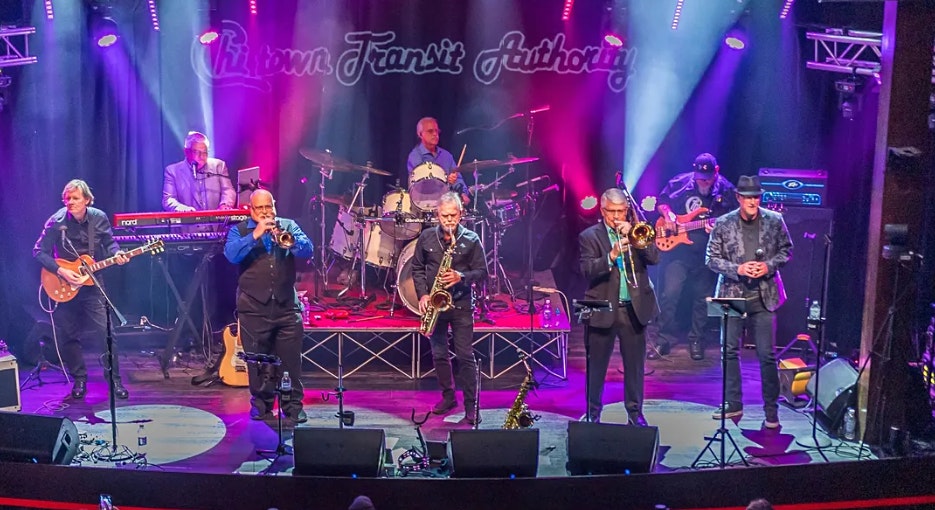 Chi-Town Transit Authority is a 8-piece group based out of Atlanta, Ga. established in 2017 and dedicated in reproducing the “Chicago” Concert experience,

As a tribute band, Chi-Town features a tight horn section along with the dynamic vocal harmonies that Chicago is famous for!

Chi-Town performs all of the familiar and famous songs covering over 4 decades of steady hits written and recorded by Chicago.

Chi-Town’s emphasis is on the kind of live show that brings down the house and leaves the crowd calling for more!… If it’s excitement you are looking for, Chi-Town Transit Authority is the band who can bring it!

Chicago Transit Authority, better known as “Chicago” is a Rock & Roll band with horns, blending elements of classical, jazz, R & B, and pop music. Chicago has produced a steady stream of hits that has played on the radio and in major movies throughout the 60’s, 70,s and 80,s and is currently one of the longest running and most successful rock groups to come out of the U.S.A!

Chris Horton (trumpet)Chris started playing trumpet at age 7 and decided this was the way to live when he met Al Hirt at age 12. He has played with numerous Atlanta and DC bands and on stages with BJ Thomas, The Spinners, Cab Calloway, Holiday on Ice, Duke Pearson’s jazz band, Ringling Brothers/Barnum & Bailey, Circus World/ Sarasota and is a vet of 15 Broadway shows and touring companies. Chris was first call on lead trumpet under Columbia Artist’s Touring Division and has served as professor of contracts, copyright, and artist management at The Art Institute of Atlanta while performing regularly in the Atlanta area.

Drew Roberts (bass, vocals)Drew is completely self taught. He has been playing in the Atlanta area since the late 1980s, and has played in front of audiences as large as 11,000. He has played and/or recorded with Awaken, Angel Down, Under the Radar, Reality Check and presently with the Glow Band. He is a fan of and is influenced by progressive rock, classic rock classic metal and jazz fusion.

Tom Davis (drums, vocals)Drumming for over four decades, Tom has toured the U.S., Europe, and the Middle East and opened for The Guess Who, Aerosmith, The Steve Miller Band, ELO and other international iconic groups of the 70s & 80s. Most recently, Tom has played with members of Original Parliament and the B.B. King band and is now enjoying working with the great songbook of Chicago Transit Authority in Chi-Town!

Jim Lee (trombone)Jim is a native of the SF Bay area, and has a degree in trombone performance from Cal State University East Bay. Jim has traveled and performed throughout most of the U.S. and overseas as far flung as Western Samoa and Rotterdam, Holland. Jim grew up listening to Chicago and other “horn bands” but has played just about every style of music you can think of. Jim believes in having fun, no matter what he’s playing, and loves having fun playing the music of Chicago.

Thom Jenkins (alto and tenor sax, flute)Thom is a woodwind player and percussionist who grew up listening to the music of Chicago. Thom has a music degree from Western Carolina University and has performed in 14 different countries…. so far!

Michael Cahen (guitar, vocals)Growing up in a musical family in Richmond, VA, Michael was destined to earn a living as a musician, singer/songwriter and guitarist. Having toured extensively in the southeast, Michael has a soulful lead and back up harmony, playing lead and rhythm guitar…you won’t find him playing on anything but a Gibson or Fender.

Jeff Joiner (vocals)Jeff began singing in church when he was 14 years old. He started in choirs and ensembles, later moving into solos and duets. He has performed duets with Christian recording artist Babbie Mason, and sung backup for Mac Powell from Third Day for his Atlanta area shows. He has performed at the RCA Dome in St. Louis and the Super Dome in New Orleans for the Southern Baptist convention. Jeff says that singing has always been a part of his story, and he is honored that the story continues with Chi-Town Transit Authority.

Mark Lloyd (keyboard, vocals)Mark has been performing across the nation for over 40 years. Originally from Delaware, he started at an early age playing music with his older brother, Benjie, in Nashville where he shared the stage with many Country Music stars and Hall of Fame inductees. He also spent his days learning from some of the best musicians in Nashville playing in the studios. A treat at age 17 was to meet Elvis’ drummer, D. J. Fontana and to work along side him. Mark’s journey took him to Atlanta over 30 years ago where he recorded with some of music’s R & B legends and performed in many venues across town. He has many musical influences in addition to Chicago, The Beatles, Elton John, and Billy Joel to name a few. He loves and has played many different genres of music. Mark loves to entertain and you will see his excitement come out on stage.