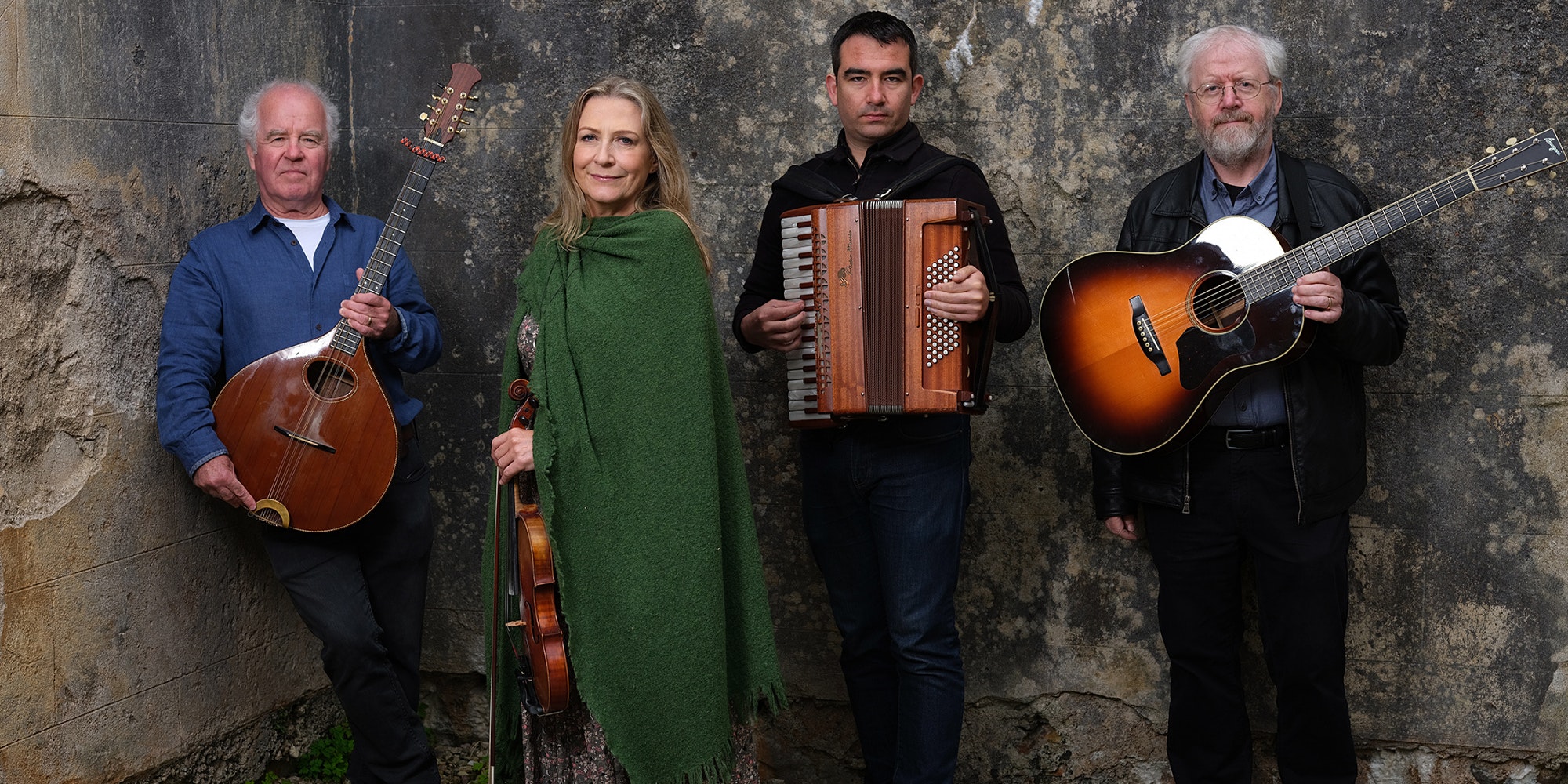 Altan appearing at The Tin Pan in Richmond, VA

“THE HOTTEST BAND IN THE CELTIC REALM” – The Boston Globe

The spirit and sound of Altan comes from the deep and rich musical tradition of their native Co. Donegal. On one of his many visits to the Donegal Gaeltacht of Gaoth Dobhair, Belfast born flute player Frankie Kennedy met fiddler and singer Mairéad Ní Mhaonaigh, sparking off a deep musical connection, marriage in 1981, and a journey that took them all over the world. Their vision was to bring the unique repertoire of Donegal music to the world and that mission is still as strong as ever.

In the mid 80s, Mairéad and Frankie recruited bouzouki player Ciaran Curran from Fermanagh, whose intricate counterpoint is at the center of the Altan sound, and guitarist Mark Kelly from Dublin, whose mastery of a wide palette of guitar styles and harmonic vocabulary add a breadth and depth of color. As a band, Altan played their first concert on June 1st 1985, in St. John’s Church in Listowel, Co. Kerry at the famous Listowel Writers Week.

Their first album, simply titled Altan was released in 1987 and quickly followed by Horse with A Heart, which saw the inclusion of Paul O’Saughnessy on fiddle. Paul had joined the band on its first US tours, lending his stunning virtuosity and in-depth knowledge of the Donegal style. He performed on the subsequent three albums. In 1992, the album Harvest Storm brought with it Dáithí Sproule on guitar, himself one of the pioneers of guitar in Irish traditional and folk music, having played with the wonderful Skara Brae with the O’Domhnaill family and Buncrana native Ciaran Tourish who excelled in fiery counterpoint fiddle.

One of the band’s finest hours came with the release of Island Angel in 1993, which was recognized by Billboard World Music Charts as the second biggest selling world music album globally in 1994 and in the same year, Altan performed for Bill Clinton at the White House. The band would play for US Presidents over the course of their career as well as accompanying Irish Presidents on their state visits. Shortly after the release of this album, the legendary accordionist Dermot Byrne joined the band.

Sadly, on September 19th,1994, the band and wider world of music was dealt a devastating blow with the death of founding member Frankie Kennedy. His vision, artistry and sense of fun is still at the heart of Altan and his legacy is carried and celebrated in every note.

A record deal with Virgin Records followed in 1996, which catapulted the band on an extensive touring schedule over the subsequent decade. This period saw them working with many of the great American performers such as Dolly Parton, recording on her album Heartsongs (1994) and its follow up, Little Sparrow 2001; she returned the favor on the band’s record The Blue Idol in 2002 by dieting with Mairéad on the song The Pretty Young Girl.

The band have traveled with Ireland’s President Mary MacAleese and President Michael D. Higgins on state visits abroad to Japan, North Korea and Italy. President Higgins invited them to join him in his residence, Áras an Uachtaráin in 2018 to celebrate their 30 years as a band. The Donegal County Council held a civic reception in their offices to mark the occasion in May 2018. In 2006 the Irish Government also honored Altan by putting them on an official postal stamp to celebrate their contribution to the Irish culture one of the highest honors to be bestowed on an Irish citizen.

Martin Tourish a past TG4 Young Musician of the Year, took the accordion seat in late 2013 and the band recorded their album The Widening Gyre in Nashville with many of the great Bluegrass and American performers, such as Mary Chapin Carpenter, Jerry Douglas and Alison Brown. This album explored the connections between Irish and Bluegrass music, a particularly special moment of which was performing at The Grand Ole Opry with Ricky Skaggs in 2016.

In 2017, the band released their first book, Altan: The Tunes, based on a collection of 222 melodies that they collected recorded over their 30 year history. Martin Tourish transcribed the dance music and meticulously interviewed all the band members for additional stories and background information. Containing a detailed commentary on each of the tunes, it is the only collection of Donegal music currently in print.

Mairéad Ní Mhaonaigh was awarded Donegal Person of the Year in 2008 and the coveted TG4 Gradaim Ceoil (Music Award) 2017, for her musicianship and singing. The highest accolade which a traditional musician can receive in Ireland.

In celebration of the band’s latest album, The Gap of Dreams, the band has brought their music all over Europe and Ireland, the US and Canada, Japan, Australia and even North Africa. The latest album celebrates the roots of their music in Donegal folklore. It was recorded in the Attica Studios in the mountains of Donegal which contributed to a wonderful atmosphere which permeated throughout the recording. The title refers to that ‘gap’ or ‘door’ between this and the ‘other world.’ The older fiddlers , whom they got their music from, always associated with the “other world” as the source for their music and inspiration. They would describe poetically about encountering the fairy folk or listening to tunes on the wind or on the shore listening to the sound of the waves.

In creativity the ‘Gap of Dreams” is never shut.