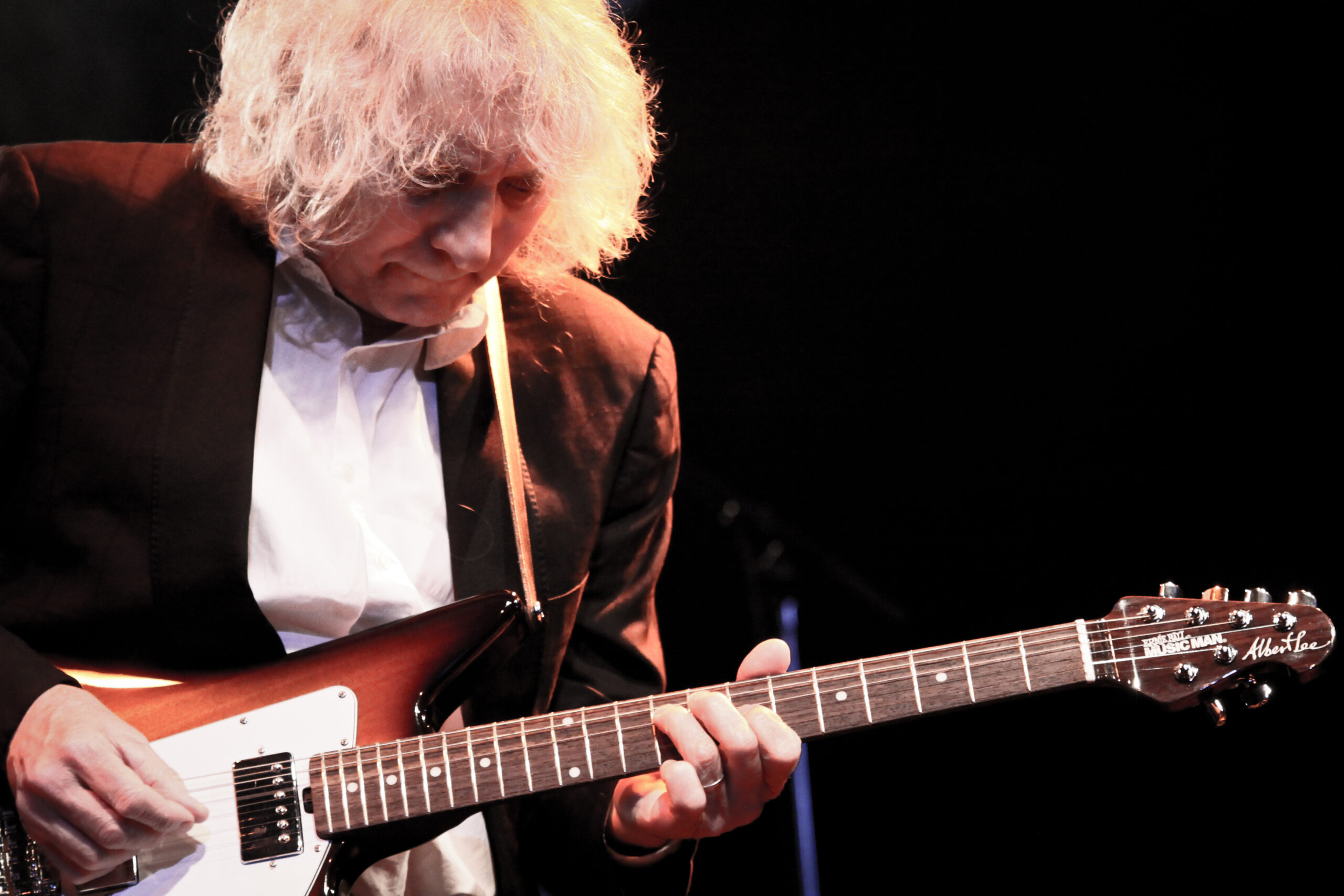 Albert Lee appearing at The Tin Pan in Richmond, VA

“The greatest guitarist in the world.”- Eric Clapton

Guitar legend ALBERT LEE first came to prominence during a 1964-68 stint in British Blues and R & B stalwarts Chris Farlowe’s Thunderbirds. After working in the UK bands for touring country acts such as Bobby Bare and Skeeter Davis, Lee’s next full-time berth was two years with the UK answer to the Flying Burrito Brothers and Nitty Gritty Dirt Band-Head, Hands, and Feet. His reputation grew and session work blossomed, including appearances on “The London Bo Diddley Sessions” for Chess and Jerry Lee Lewis’ “The London Sessions”. This and other work with U.S. based greats led to a permanent position in the Crickets, and by the time that ended Albert had long since made Southern California his home. There he became friendly with Don Everly, who had also settled in Southern California; they played regularly on a formal and informal basis, with Albert contributing to Don’s 1974 solo effort “Sunset Towers”. The move to California also led to work on sessions for the debut album of Jackson Browne.

Lee joined Joe Cocker’s band in the mid-70s, a time that included recordings for the April 1976 release “Stingray”. From there A & M Records signed Albert as an artist in his own right. The solo album’s completion was delayed by constant studio and touring work, primarily in Emmylou Harris’ Hot Band; in 1976 Albert replaced James Burton when Burton left to continue work with Elvis Presley’s TCB band. The Emmylou Harris albums “Luxury Liner” (Jan. 1977), “Quarter Moon in a Ten Cent Town” (Jan. 1978) “Blue Kentucky Girl” (April 1979), “Roses in the Snow” (May 1980, recorded July 1979), and “Evangeline” (Jan 1981, recorded 1978-80) all include Albert. He ended his touring tenure with the Hot Band to complete his solo album, and “Hiding” was finally released in 1979.

His studio work in this period continued, including contributions to three albums by Rosanne Cash: 1979’s “Right or Wrong”, 1981’s “Seven Year Ache”, and 1982’s “Somewhere in the Stars”. Other sessions included work with Dave Edmunds, Rodney Crowell, Nanci Griffith, Carlene Carter, and countless others. His solo efforts continued as well, with the self-titled “Albert Lee” in 1982, and instrumental releases on MCA- the acclaimed “Speechless” (1986) and “Gagged But Not Bound” (1987).

When the Everly Brothers reunited on September 23, 1983 at London’s Royal Albert Hall, Albert was on hand as guitarist and Musical Director. He continued in that role for over 20 years until the Brothers retired. An invitation in 1987 by steel guitarist Gerry Hogan for Albert to play his annual festival led to the formation of Albert Lee and Hogan’s Heroes, who remain an active touring force in the UK and Europe- and a recording force worldwide, with 7 albums to their credit. The DVD “Live at the Tivoli” was released in 2011, and the new CD, “On the Town Tonight” was released on February 14, 2012.

Albert remains an occasional member of the Crickets, and tours regularly with Bill Wyman’s Rhythm Kings. Sugar Hill Records released Albert’s solo efforts “Heartbreak Hill” in 2003 and “Road Runner” in 2006. A summer 2011 jaunt with John Jorgenson prompted Albert to form his own U.S. band for the very first time.

“Albert is in every sense of the word, a genuine guitar wizard“.- Earl Scruggs

“When Saint Peter asks me to chronicle my time down here on earth, I’ll be able to say – with pride if that’s allowed – that for a while I played rhythm guitar in a band with Albert Lee.”- Emmylou Harris